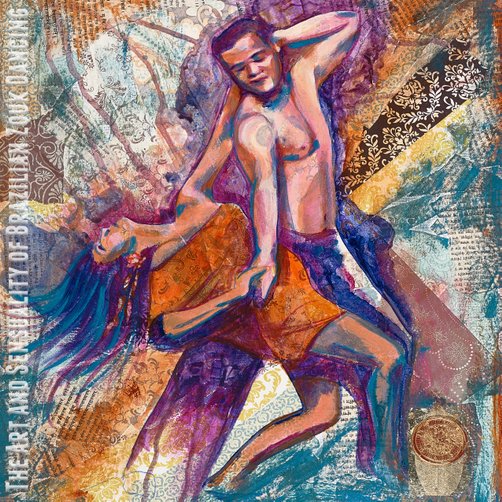 Marie Alonzo Snyder (modern dancer, choreographer, educator and scholar), presents a clear and helpful introduction and guide for anyone interested in learning about Zouk—the fast growing partner dance—in her debut book, The Art and Sensuality of Brazilian Zouk Dancing. Marie (a professional dancer for over three decades) has been dancing Zouk for the past 5 years and recently brought this beautiful, sensual dance to the Big Island of Hawai‘i.

(Research made 2014 by Charlotte Mathiessen)

This sensual dance originates from Brazil and contains rhythms from the Caribbean islands. Brazilian ZOUK is a very new dance style which came at mid 90´s and has since then spread through the world in a short time. ZOUK means party and no name could fit better!
ZOUK can be anything from a funky hip hop dance to a soft flowing dance filled with emotion – only your imagination sets the limits. The dance has its roots in Lambada but is now days danced to all types of music - often slower music like RnB.
ZOUK is known for its many head movements, but it can also be danced completely without these.

Caribbean music has always had a great influence in the northern region of Brazil. Zouk is one of these music styles, originated in the French Caribbean islands of Guadeloupe and Martinique. It is usually sang in ‘creole’, a mix of French and African. Researchers believe that its rhythmic base comes from the Arabian culture. The same basis is also found in many countries like Spain and Portugal, in the African continent and practically all of America.
Zouk rhythm has spread through the world, but by being divulged trough France, it is believed in many places, including Brazil, to come from France.

Traditional Zouk was first developed in Rio de Janeiro around the mid 90's when Lambada songs stopped being composed. It was developed and first taught by Adilio Porto and Renata Peçanha in Brazil's most famous dance school for Brazilian couple dances. They danced to the slower music of Caribbean Zouk, thus making it easier to learn and vary steps, moves, patterns and combinations. The characteristic steps that were created are the basic step, the opening and lateral step, elastic and bonus (also called boomerang in Europe). Traditional Zouk is more suitable for slow tempo music and emphasizes strong beat by taking a longer step on the strong beat.

Since adding new steps and changing the characteristics from Lambada, a new name was given to the dance; originally 'Zouk Love', and later just 'Zouk'. Today, Brazilian Zouk has changed and thus the name 'Traditional Zouk' has been given the style that was first taught by Adilio and Renata.

LambaZouk, or the Porto Seguro-style, is often thought of as the evolution of Lambada and came at late 80´s. This style is characterized by high energy and feel good attitude. Although it’s fast and energetic, it flows smoothly with continuous and rhythmic moves. Dancers follow circular movements. One way in which LambaZouk differs from Lambada is that they have removed wiggling shoulder movements. Instead shoulders are kept fixed while the hips move to create a sensual effect. A number of movements have been added to the modern version of this style, mainly created by Didi Santos of Brazil.
The original LambaZouk is also unique in the way steps are performed to music. Steps have equal emphasis on the strong beat and the two following beats. This way dancers fluently incorporate sharp movements to accentuate strong beat without stopping the dance. Even though this timing is popular, it is not exclusive. Many dancers also dance by taking a longer step on the dominant beat as in Traditional Zouk. It’s also a common to switch between the two timings within the same song. Kizomba music is popular in LambaZouk due to its rhythm and pace. Since the music is faster, head movements are sophisticated and done more often, LambaZouk requires good technique and timing to perform head movements without injury.

Zouk dance is changing and developing all the time, adding and changing techniques, leading and following, but still keeping the frame and pattern of Brazilian Zouk. New music is also part of this development, leading to new movements and interpretation of the music. Some of the styles are mentioned here.

NEOZOUK
A variation of Zouk created by Mafie Zouker and Ruanita Santos in 2007, with the aim of showing different trends in Zouk. It’s a partnered lead-follow dance with fluidity in the assignment of lead and follow roles. Each body has its shape, so each dance has the same trait but with a different contour. The music is mixed and fused with trance and modern music, with basic Zouk beats. The original French or Portuguese lyrics are usually omitted.

FLOWZOUK
Related to NeoZouk, Arkkanjo influenced Rio's dance scene a lot with his style 'Flow Zouk'. As the name suggestes, the movement and leading are very fluent and flowing. There is a lot body contact and body movements in this style.

SOULZOUK
Soulzouk was developed in 2005 by China, a teacher from Rio, Brazil. Soulzouk (also called "Zouk freestyle") differs from Brazilian Zouk in how it connects with the music. The style is not only based on the pace but also on the melody of the song. It can be danced to Zouk music, but is also taught to a variety of music genres that don't have a Zouk beat.

MZOUK
Mzouk was created in Palma (Spain) by fusion of the Brazilian Zouk, Zouk of the Antilles, and influences of the Spanish Rumba. The technique was created by Jefferson Costa (Gêgê ). Jefferson experimented with 6 dancers. They studied the adequate way of positioning the body and established exercises to make Mzouk a safe dance. After seven years the six dancers became teachers of the new dance style. Two of the professors are Daniel and Leticia Estévez López who since 1998 work with diffusing Mzouk in different environments.
In 2000, Jefferson Coast and his six teachers founded the Association Mzouk of Mallorca which is a cultural association with the aim to spread Mzouk by means of contests, seminars, and congresses.

LYRICAL ZOUK
Invented by Lindale Thompson, and the first style from the London Lambada Zouk Scene. The style concentrates on connection between partner and music, working with the internal chemistry between the couple and reaching outwards. Although it works with the rhythm, there’s also emphasis on musicality. Although initially taught in the 1-2-3 style, dancers are encouraged to connect with the music and look for options in movement and travel. Lyrical Zouk is taught with Zouk and many other musical genres ranging from classical to swing.

AUSTRALIAN ZOUK
A fusion of Rio-Zouk & Neo-Zouk. This style is seen in many performances by instructors from Australian dance schools. Zouk in Australia is heavily influenced by years of teachings of resident Brazilian instructors such as Kadu Pires & Larissa Thayane, Claudio & Monica, Alisson Sandi as well as non residents such as Mafie Zouker, Renata & Jorge, Adilio Porto.